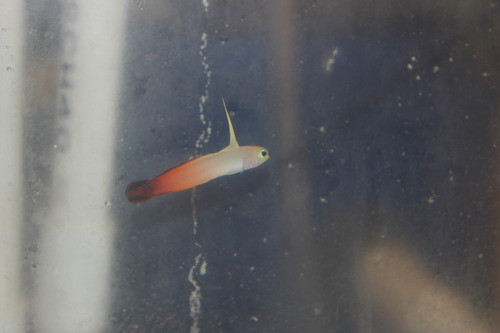 Nemateleotris magnifica The Firefish head is yellow, the anterior portion of the body is white, and the posterior portion a pinkish to orangish red. The dorsal, anal, and caudal fins are highlighted in black. More than most other fish, firefish need hiding places when they feel threatened. Fire Goby have always been one of the more popular fish in the marine hobby. Because they try to jump out of the tank, especially if stressed, the Fire Goby requires a 30 gallon tank or larger with a cover. Hobbyists who use a halide system with an open top should construct a Plexiglas "edge" around the trim, at least 10" tall. It is generally not aggressive towards other fish except those of its own species; a mated pair can live peacefully. The Fire Goby prefers moderate lighting conditions, with a moderate current passing over the reef. Along with algae and zooplankton growing in the tank, the diet of the Fire Goby should consist of finely chopped small crustaceans, vitamin-enriched brine shrimp, mysid shrimp, and prepared foods.