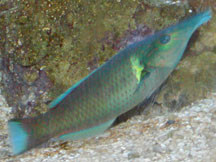 Gomphosus caeruleus - The bird wrasse has a long, slender snout that is designed for picking prey out of rocks and corals. Its snout is said to resemble the beak of a bird, giving rise to its name "bird wrasse" or "birdmouth wrasse." The males and females of this species are different colors. The male is green and is referred to as the green bird wrasse. The female is brown or black and is referred to as the brown or black bird wrasse. Both males and females have an elongated body which is tapered at the head and tail. They have soft, continuous dorsal and anal fins that they often hold close to their body, which accentuates their torpedo-like shape. Suitable for a fish only tank. Will eat most invertibrates.