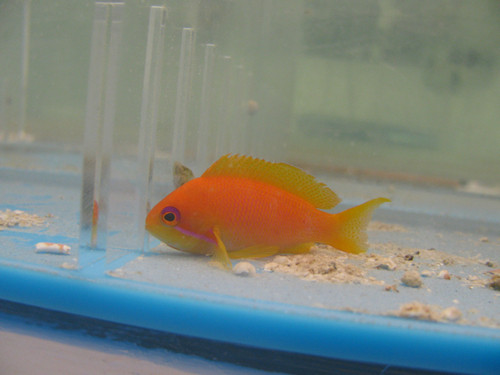 Males are best kept alone with several females, or singly in a 25 gallon or larger tank. A marine species, the Anthias dwells in the middle of a tank, but appreciates the availability of several hiding places. Anthias species all share the trait of being hermaphroditic. If a dominant male perishes, the largest female of the group will often morph to take its place. The diet is consistent with other members of the Anthias group - zooplankton and floating filamentous algae. In the aquarium, it should be fed a varied diet of mysid shrimp, vitamin-enriched brine shrimp, frozen preparations, and other meaty items for zooplankton feeders, several times daily.