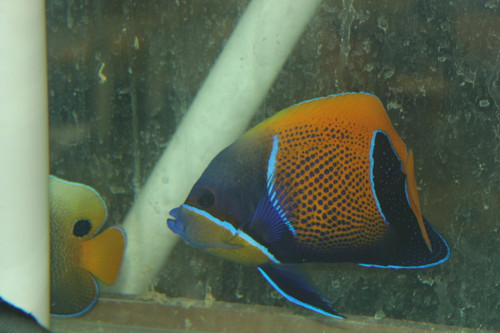 Pomacanthus navarchus - The Majestic Angel, also know as the navarchus angel, is one of 13 species in the genus Pomacanthus. It enjoys a widespread distribution throughout the Indo-Pacific Ocean as well as parts of the eastern Indian Ocean. It does not occur in the South Pacific or Red Sea. It is naturally found in areas rich in coral coverage from lagoons to outer reefs. Juveniles tend to remain in more shallow protected areas while adults can be seen as deep as 120 feet. Their natural diet is comprised primarily of sponges and tunicates. The adult Majestic Angelfish is a brilliantly colored fish. The juvenile fish, similar to many of the Pomacanthus angelfish, is mostly blue in color with white stripes. It begins to transform into adult coloration at a relatively small size (~ 2 1/2 inches). The Majestic Angelfish is one of the smaller species of the genus and reaches a maximum adult size of approximately 10 inches. It rarely attains this size in the aquarium and is a slow grower; although they are reported to live over 21 years!