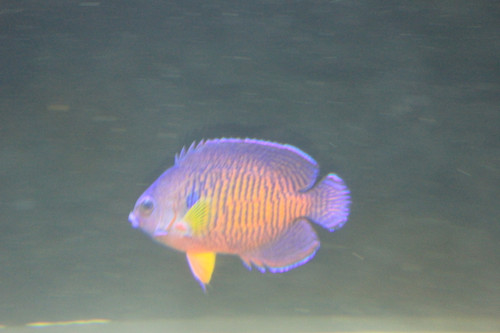 This fish cannot be kept with other Angelfish. If you're attempting to purchase two or more Angelfish for the same aquarium it will cause them to fight and most likely one will not survive, so if you're placing an order that has 2 or more Angelfish in it we will have to place the order on hold until we're able to contact you to ensure you're not putting them into the same tank. If you understand they cannot be kept together, but would like to purchase two or more in the same order(separate tanks, group order, etc.) you will need to write in the Special Instructions area at the end of the shopping cart that you understand they cannot be kept together. Tremendous time and effort is put into ensuring the health of these fish and it is very important that you're fully aware two Angelfish should not be kept in the same tank. The Coral Beauty is a stunningly colorful Dwarf Angelfish. Its body is mostly dark blue while the sides of its body has an undercolor of reds, yellows and oranges with narrow blue bars. These fish do very well in aquariums and prefer lots of rockwork to feel comfortable. The Coral Beauty Angel should be kept in a tank of 50 gallons or larger, so it'll have ample room to roam. They will spend most of their day grazing algae that grows on live rock. They should not be kept with other Dwarf Angels and only one should be kept per tank. The Angelfish family is a group of colorful and elegant fish that are adored by both the serious and casual observer. These fish are mainly available to the hobbyist under the Genus Pomacanthus and Centropyge. Pomacanthus Angels are the larger more robust species. The Centropyge Genus are made up of smaller fish that feed primarily on algae from the reef surface. The adult Pomacanthus Angels usually have long dorsal and anal fins and a rounded face. The Pomacanthus Angels will change color quite dramatically from their juvenile stage to adult stage. The Centropyge Angels are found predominantly in the Indo-Pacific while only a couple of species, like the Pygmy and Flameback Angels, are found in the Atlantic and Caribbean. At the same time, the Pomacanthus Angels dominate the Atlantic and Caribbean while in the Indo-Pacific they are less prominent. The Centropyge Angels do not change color dramatically from their juvenile stage to adult stage. These smaller Angels are often seen milling around reefs which they use for both shelter and as a food source. Angelfish are differentiated from Butterflyfish by the small spine that extends from the bottom of their rear gill cover.