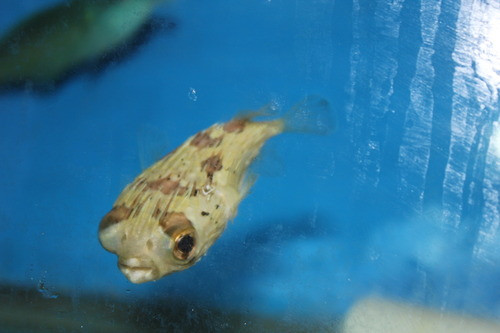 Diodon hystrix - The Porcupine Puffer is also known as the Porcupinefish or Porcupine Pufferfish. It has spiny appendages which cover most of its body, which may vary from light gray to mottled tans, sometimes with dark spots. Its teeth are actually a fused beak-like structure. The Porcupine Puffer lacks pelvic fins but has learned to use the pectoral fins to move about. A 90 gallon or larger, fish-only aquarium with a good protein skimmer is a suitable home. It may be aggressive at times, nipping the fins of tank mates and leaving a circular hole as its mark. It will eat invertebrates found in a reef aquarium. It has the ability, when threatened or scared, to inflate its body to almost twice its normal size. The Porcupine Puffer should be fed a variety of meaty foods.