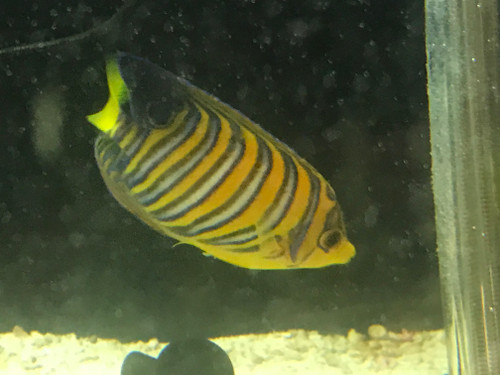 Pygopllites diacanthus - This is one of the most spectacular of all reef fishes, sporting alternating yellow and white bars with blue borders, a yellow tail and pelvic fins and the yellow chests. Despite it being a difficult fish, it is one of the most popular angels, and usually a safe bet in reef aquariums. Generally regarded as reef safe, most of those we sell go into reefs. Attempt this fish only in an aquarium containing live rock. In a bare "fish tank" with nothing to graze on, regal angels seldom adapt, but in reefs or with live rock they generally fare notably better. Keep only with other peaceful fishes and do not house with bold species of angels. This fish will not adapt if it perceives any threats from tankmates. Minimum 75 gallon tank required, but preferably larger.  The most difficult part of keeping regal angels is getting them to eat frozen foods. WE ONLY SELL REGALS THAT ARE ALREADY EATING IN OUR TANKS, SO YOU DON'T HAVE TO WORRY!