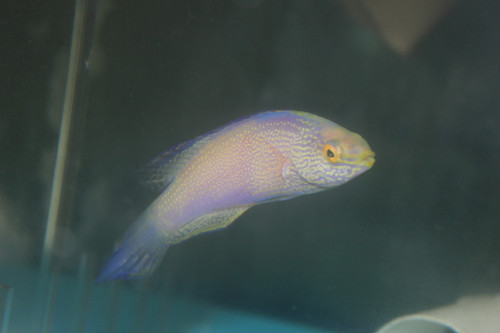 Rhomboid Fairy Wrasse, Cirrhilabrus rhomboidalis, is among the rarest of Fairy Wrasses made available to the aquarium trade and is a true prize! This Wrasse is from deeper waters than many other Wrasses. Also known as the Golden Fairy Wrasse, it is mainly a superb sheen of yellow with honeycombed purple accents along the top and bottom of the body. Tail coloration on this great fish varies from a vivid yellow to a deep purple. Having a maximum size of about 3.5 inches, the Rhomboid Fairy Wrasse is hardy, active, and peaceful. Its small size makes it an ideal candidate for the mini-reef aquarium. As with other members of the Wrasse family, its diet should be carnivorous including meaty frozen foods or Brine Shrimp. A sand bed and Live Rock should be provided for all Wrasses. Live Rock provides numerous small life forms that Wrasses consider a tasty treat as well as another place to hide when they feel threatened. As with other Fairy Wrasses, the Rhomboid Wrasse may be a leaper and, therefore, requires a covered aquarium.