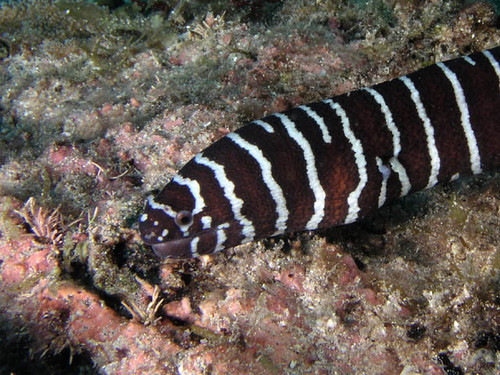 Gymnomuraena zebra Easily recognized and named for its zebra-like stripes, the Zebra Eel is one of the more docile and less aggressive eels. Rather shy, it should be provided with plenty of shelter for hiding. This eel generally will not disturb or be disturbed by other tank inhabitants, and can live communally with other eels as well. It differs from other morays by having blunt, pebble-like grinding teeth with which they crush shelled invertebrate prey they feed on, primarily crabs, shrimps and mollusks. Nonetheless this eel has a nasty strong bite, so the use of a feeding stick is a good idea. Sometimes a specimen may not accept tank fed fares in the beginning, but over time it adapts fairly well to tank life and will accept fresh or frozen meaty crustacean preparations suitable for carnivores. When food is present it may take on a more aggressive behavior. Eels do not eat on a daily basis. Feedings 1 or 2 times a week should be sufficient, and then only feed them as much as they will consume. From time to time this eel goes into what we describe as a "hybernation" period, often hiding and not eating for several weeks or so. Can grow to about three feet (36 inches). Minimum Tank Size Suggested: No less than 75 gallons, because even though you may have a smaller specimen it can outgrow a tank rather quickly.