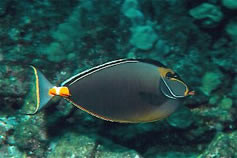 Naso Tangs (Naso lituratus) are brown or grayish overall with a yellow dorsal fin, orange "lips" and orange tail spines. Very large males have long filaments on the upper and lower lobes of the tail, and command a very high price. Juveniles don't have the orange details yet.

Naso Tangs (Naso lituratus) are very active; thus, it is important to provide it with plenty of swimming space and a large tank. It also needs suitable hiding places. In nature it feeds almost entirely on brown macroalgae and should be offered a wide a variety of foods in the aquarium, including plenty of algae. When stressed it develops a blotchy color pattern. It is usually not overly aggressive toward its tankmates, except possibly members of its own kind.

Naso Tangs (Naso lituratus) require a minimum 125 gallon tank.  They can grow to be more than a foot long!  Good quality live rock to pick on is a big plus.  They require lots of algae to eat.